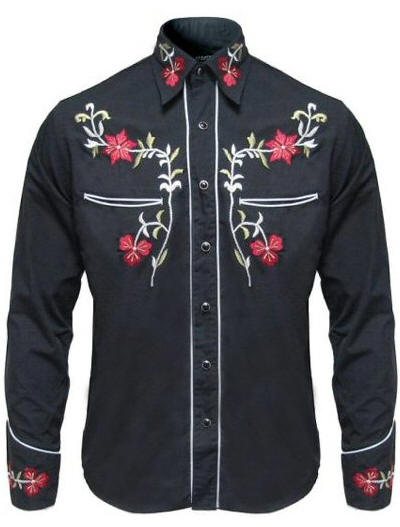 1 - Fit yourself with an authentic brown, black or gray cowboy hat. Wool felt hats are in fashion in the winter and straw cowboy hats are in fashion in the summer. A real cowboy always owns more than one hat.
2 - Dig out a pair of worn-looking jeans from the back of your closet, preferably Levi's or Wrangler's.
3 - Purchase a long sleeve, button-down oxford shirt with two breast pockets. This can be a sold color shirt, plaid or striped. Make sure it's well ironed and wrinkle-free.
4 - Wear brown, black or gray leather handcrafted cowboy boots (depending on what color your hat is).
5 - Wear a western bolo tie, a cord with a decorative clasp that goes around the neck and is worn like a necktie. You can't get anymore cowboy than the bolo tie.
6 - Throw on a leather belt in a color to match your boots and hat, and a huge silver belt buckle, preferably with your name or initials on it, and you are there.

Bill Haley and his Comets during a TV-appearance.

In 1951 a western swing bandleader named Bill Haley recorded a version of "Rocket 88" with his group, the Saddlemen. It is considered one of the earliest recognized rockabilly recordings. Haley and his band mates crafted a rockabilly sound during this period as the Saddlemen. It was followed by versions of "Rock the Joint" in 1952, and original works such as "Real Rock Drive" and "Crazy Man, Crazy", the latter of which reached #12 on the American Billboard chart in 1953.

On April 12, 1954, Haley with his band (now known as Bill Haley and His Comets) recorded "Rock Around the Clock" for Decca Records of New York City. When first released in May 1954, "Rock Around the Clock" made the charts for one week at number 23, and sold 75,000 copies. A year later it was featured in the film Blackboard Jungle, and soon afterwards it was topping charts all over the world and opening up a new genre of entertainment. "Rock Around the Clock" hit No. 1, held that position for eight weeks, and was the #2 song on the Billboard Hot 100 chart for 1955. The recording was, until the late 1990s, recognized by Guinness World Records as having the highest sales claim for a pop vinyl recording, with an "unaudited" claim of 25 million copies sold.

Rock 'n' roll, an expansive term coined a couple years earlier by DJ Alan Freed, had now been to the pop mountaintop, a position it would never quite relinquish

In the United Kingdom, bolo ties are known as bootlace ties. They were popular with 1950s Teddy Boys, who wore them with drape suits.

Along with other 1950s fashions, bolo ties were revived as part of the Rockabilly look in the 1980s. The bolo tie returned as a popular fashion accessory in the fall of 1988 when male Hollywood stars would be frequently found wearing them. Chain stores like Jeans West and Merry-Go-Round sold multiple choices for all occasions.

During the 1980s and 1990s bolo ties, some elegant and expensive, were sold in Japan, Korea, and China. Some had fancy, hand-made cords and unusual tips. Sales overseas skyrocketed post 1970's, this was due to the overflow from the United States, where it had fallen out of fashion.

It is also said that the bolo tie is a North American pioneer creation that dates back to between 1866 and 1886. There is a bolo tie on display at a trading post in Zuni Pueblo, New Mexico, said to date back that far

Line Dancing is a popular form of social dancing and one of the few forms of dance that DOES NOT REQUIRE A PARTNER  It is a high energy form of dance and it incorporates moves from waltz, mambo, salsa and many others. Come and get some exercise, have fun and learn some new dances.

Please report any error on this page